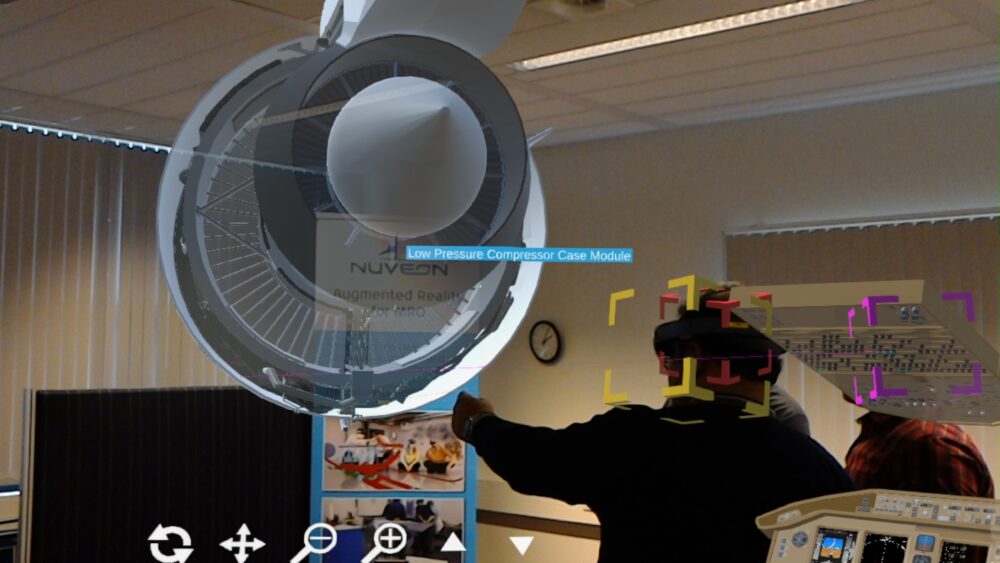 Author: By the AREA Editor

KLM, the flag carrier airline of the Netherlands, traces its history back to 1919 when Queen Wilhelmina gave it her royal stamp, making KLM one of the world’s first commercial airlines. Today, KLM’s fleet of 116 aircraft flies to 145 destinations worldwide generating more than €10 billion in revenues. In June of last year, KLM Engineering & Maintenance and Royal Netherlands Aerospace Centre (NLR) officially launched a joint venture, NUVEON, for the development of new AR products for MRO (maintenance, repair & overhaul).

NUVEON’s initial solutions address training needs by using Microsoft HoloLens to bring a complete virtual aircraft into the classroom. As part of our Thought Leaders Network program, we spoke recently with Wanda Manoth-Niemoller, Director of Commercial Development for NUVEON, to learn how the new venture is progressing.

AREA: What was the motivation for starting NUVEON?

Manoth-Niemoller: Around 2016, the KLM training department wanted to know if AR was mature enough that we could use it. We started off with a proof of concept to see if we could benefit from AR and we chose NLR as our development partner. We built and tested one module and determined it was mature enough to use in training. Our learning experts felt it was especially useful for explaining system behavior, which is very difficult to do in a classroom setting. Showing how a system works is much more effective than simply reviewing a schematic. We built two more modules and saw the potential to do more with AR, so that’s when we decided to start NUVEON.

AREA: When you were looking into AR, why did you feel that you had to develop your AR software product?

Manoth-Niemoller: Because there was no existing AR product that we could use, and we wanted to commercialize whatever we created and make it available to other companies.

Manoth-Niemoller: The original proof of concept has been accepted for training by EASA, the European Aviation Safety Agency, which is the European equivalent of the FAA. That means our software can now be used to sign off on practical tasks for MRO training. We now offer several solutions for training on the Boeing 777 and 787. And there are more products on the way.

AREA: What have been your biggest challenges so far?

Manoth-Niemoller: The biggest initial challenge was the time it took to develop the product, because it had to be an exact copy of reality for the EASA to approve it.

AREA: What’s the next big hurdle for NUVEON?

Manoth-Niemoller: The next hurdle is to extend the range of use cases we support. Our current applications are now in day-to-day use in training, and we plan to support more systems and also extend beyond training into other use cases in MRO.

AREA: What kinds of reactions have you had from the users?

Manoth-Niemoller: It depends. The reaction often has to do with what the person is accustomed to. Some people first refuse to use it until they put it on their heads. We’ve introduced it to engineers who had already been doing the job for many, many years and were not used to innovative tools like this. They don’t see the advantage of it right away – until they put it on their heads, see what it can do, and then say, “Whoa!” and they can’t stop. They want to try everything. They see that, with AR, they can do much more than they could ever do with an operational aircraft. It actually delivers a deeper level of training. It’s effective because we enable several engineers to share a single image. They then have to solve a task together, as they would do in real life, but they’re able to get into much more detail than they’d be able to do in real life.

AREA: How are you making the NUVEON solution available to other companies?

Manoth-Niemoller: We can do it in several ways. We can conduct a training course for them, because we can use the system on location. We can also sell them the tool. Or we can develop something customized to their individual specifications.

To learn more about AREA please visit their website.https://thearea.org/wanda-manoth-niemoller-on-klms-ar-venture-nuveon/