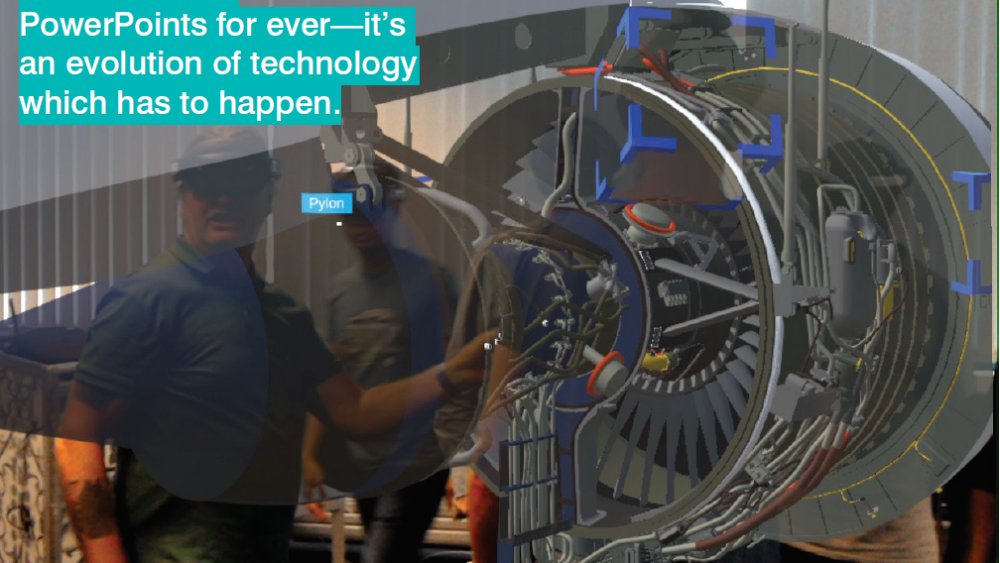 A giant turbofan engine hangs suspended in space, seemingly defying the laws of gravity. a Young goggle-wearing operator flicks his finger, and the engine rotates to reveal an exploded view of hidden blades. thanks to the goggles, his hands are free to work on a real engine using turbofan hologram to guide the maintenance. There’s a lot of glib talk currently singing praises of virtual and augmented reality (VR and AR) and the many benefits of this technology, especially for technical training.

Amid the hype, is there some reality to the claims? Professor Lori Brown thinks so. she is chair of ICAO’s next generation of Aviation Professionals Outreach program. ‘For the first time, we have the ability to take the analog world and superimpose digital artifacts, creating mixed reality aviation simulations,’ she says.

This ‘mixed reality’, which seems to be the preferred term encompassing both AR and VR technology, is evolving rapidly. The hardware has come a long way since the first Google Glass release in 2013, with the current frontrunner appearing to be Microsoft’s second-generation HoloLens goggles, released in November 2019. And a growing group of developers, seeing the goggles potential, is designing software programs to capitalize on HoloLens 2 and other hardware.

Anneke Nabben, a training specialist with the Royal Netherlands Aerospace Centre, is working with Dutch airline KLM to develop training programs for maintenance engineers using HoloLens. Their collaboration (NUVEON) has provided evidence of the value of mixed reality for such training.

The power of immersive training over conventional training is well know, a number of US studies improved retention of information through AR learning over ‘talk and test’, reinforcing the old saying about experiential learning: ‘ I hear and I forget. I see and I remember. I do and I understand’.

Bruce Hall, Pratt and Whitney’s general manager, customer training, says not only is there improved retention through the use of mixed reality learning-up to 90 per cent- but also AR brings up to 40 per cent return on investment through faster learning times and less down time for actual engines.

Through AR, the 3D virtual aircraft can be used for both theoretical and practical training. The Netherlands Aerospace Centre says in principle, it can model all complex mechanical systems in the aircraft, including systems in the aircraft, including systems which normally cannot be demonstrated in an aircraft on the ground, such as the landing gear. Difficult-to-access or dimensionally awkward parts of the aircraft can be replicated, so the invisible is made visible.

The ability to simulate normal and abnormal behavior, coupled with the virtual aircraft being ‘available at any place and any time, without wearing out’, has enormous benefits for training efficiency and effectiveness, as training can take place in more controlled environment, free of the pressure created by aircraft availability.